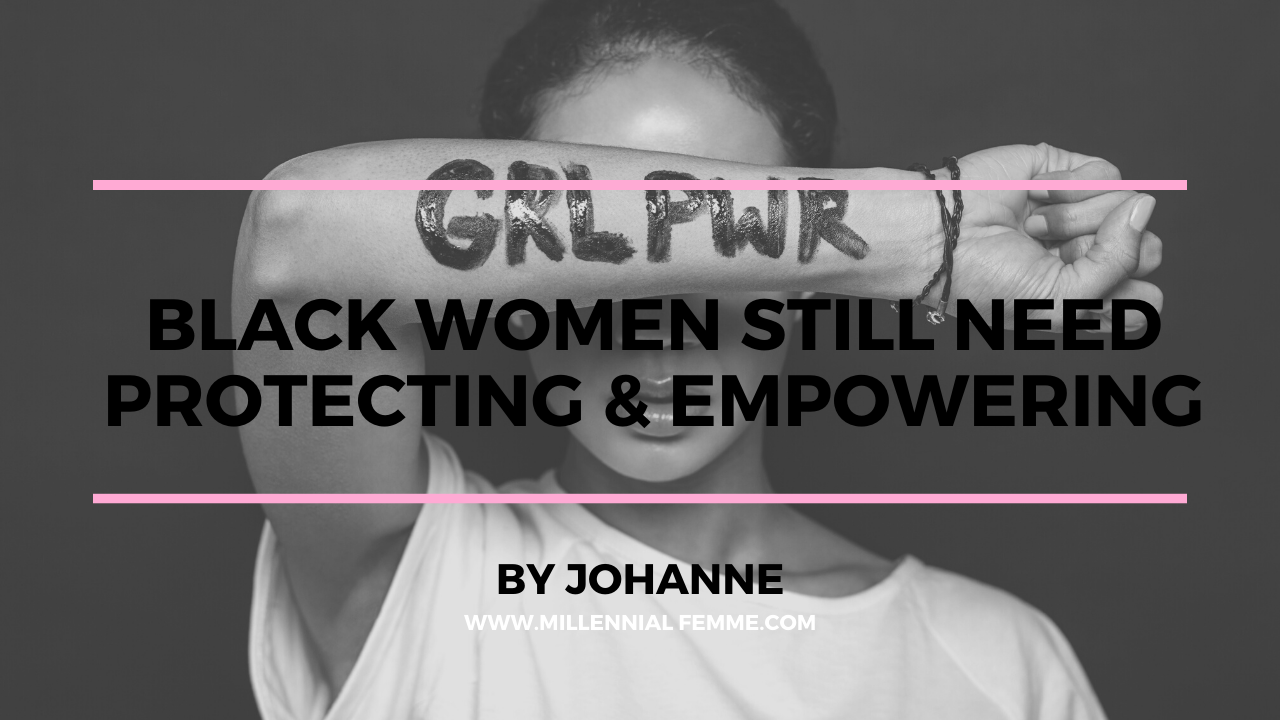 After the brutal murder of George Floyd on 25 May 2020 in Minneapolis, Minnesota by the hands of white police officers, the ‘Black Lives Matter’ movement has been significantly and passionately propelled into mainstream media. After much discussion on why black lives matter, there have also been several specific conversations about the need to protect black woman.

This discussion is new to me as a black woman, it is raw, but also very necessary. But what has been discussed to date, has not nearly had enough impact, or even began to scratch the surface on what needs to happen now.

I believe that the conversation needs continuous exploration to really get to the root of what we are as black women are still dealing with in 2020 and what can tangibly be done about it.

This article also addresses those who will be asking BUT why specifically black women, all women need protecting right? (all lives matter crew).

Amongst a myriad of deep-seated inequality issues, here are some from the top (I literally cannot type as fast as I need to, as my head is spinning with the ‘why, why, whys’).

ITS LIFE AND DEATH

Blatantly and statistically, we know that UK and US Black mothers are more likely to die giving birth than white mothers. Having first-hand experience of being left alone aged 20, with my then husband, giving birth in a well rated UK hospital, I know how real this is. When at that exact moment you need to be cared for, helped to push your baby out, but you’re left smashing the emergency button because something is going badly wrong and you are on your own, with no experts in the room. None.

The Independent reported ‘In November 2019, a report into maternal morbidity in the UK from researchers at Oxford University, found black women are five times more likely to die in pregnancy, childbirth or in the postpartum period, compared to their white counterparts. Asian women were also twice as likely to die compared to white women. This data was up from previous years, which still staggeringly showed black women were three times more likely to die than white women’.

An article by Vogue, in July this year also beautifully pens the issue on why Black Mothers are Five times more likely to die during childbirth. I’ve talked to a practising midwife who was told during her training to not pay as much attention to the black women on the ward as they ‘don’t need as much help giving birth because they are strong, have the bodies for it and don’t experience pain in the same way’. I mean seriously – we are considered a different category of ‘woman’ for the colour of our skin. Just WOW. There are so many anecdotal stories I could write for you like this.

You do not have to dig deep to read up on Serena Williams harrowing birth story either, one where she very nearly could have died due to the lack of medical care and more importantly not being listened to, by the medical experts, when she knew something was wrong. It does beg the question, if Serena Williams a famous, high flying, prominent, wealthy black women is not given equal treatment and not listened to,  what hope does the ordinary black mother have of getting the proper treatment and care they deserve?

WE ARE MORE LIKELY TO ENCOUNTER CHALLENGES, DISCRIMINATION, AND LOWER PAY IN THE WORKPLACE

Its harder for a black woman to be recognised for their work or be given hard earned promotions when right for the role. We must work twice as hard and be twice as ‘nice’, to even be considered for the senior roles we deserve. It is exhausting. If white women are dealing with the gender pay gap. We are dealing with just getting the recognition let alone breaking the glass ceiling. Yes, we as females are all up against it gender wise and those with children are balancing their careers + families. However, factually, black women are still more likely to be paid less than their white women peers.

And these are the hard facts, difficult to argue with, but what in fact is harder to address is the cultural and discriminatory behaviour so deeply rooted in systematic racism. An article by ZORA ‘From Office Pet to Office Threat’ resonated so deeply with me and it so succinctly summarises some of the challenges faced by successful black women in the office.

WE ARE STILL UNREPRESENTED AND INVISIBLE

As a black woman who grew up in the UK, I can categorically state that I could count on less than one hand the black women leaders I was witness too. Who I could aspire to, look up to, relate to even? I am showing my age here, but I had Moira Stewart (love her) the first African-Caribbean female newsreader to appear on British television reading the news! (And yes, I did want to become a news anchor because of her).  And the outspoken and amazing Naomi Campbell who trailblazed the fashion industry and paved the way for UK black models – who was always painted by the media as the angry black women (there were some dubious incidents but she was growing up and learning – can you imagine what she was living through behind the scenes?).

The severity of this impact cannot be underestimated. If you never see anyone who looks like you being successful, how do you know that you can be? Its deep and it means we must work so much harder to believe in who we are and how successful we can be.

Sure, things are changing, we are becoming more visible mainstream. I aspire to many black women including the icon that is Michelle Obama and in the UK Michaela Coel and Kelechi Okafor, all black women who are unapologetic in being black and successful.  I see many black women on social media who are creating their own businesses and slaying it – it is amazing to witness and be part of this movement. But it still feels as if this is a relatively new phenomenon, one where we have found our voice and are willing to go out there on a limb and get what we deserve.

And there is a long way to go. For instance, the famous rapper Megan Thee Stallion took to op-ed her own article in the New York Times last week entitled ‘Why I Speak Up for Black Women – I’m not afraid of criticism, and “Protect Black women” should not be controversial’.

This follows her contentious domestic violence case, where she quite blatantly was unsupported as a victim of horrific abuse. Although Megan covers a series of challenges black women face including in American politics, she does refer to her own case where she was allegedly shot in both feet by Tory Lanez, a famous Canadian rapper. Did this elicit cries of oh my god, or that is awful or what a Bastard? Frankly, it did not. Questions were asked on what she did to be shot. There was so little support for her as a victim it was deafening. As she says, ‘despite the way so many have embraced messages about racial justice this year, Black women are still constantly disrespected and disregarded in so many areas of life’. This is her proof of it.

And this is what I mean about there is still so much more to do, this is what I mean by we are often invisible. She signs off ‘we deserve to be protected as human beings. And we are entitled to our anger about a laundry list of mistreatment and neglect that we suffer’ and, I couldn’t have said it better myself.

So, I suppose the question is, how do we empower black women so futuristically we will not need protecting but will be equal in our own right, in society?

Going back to the fact that UK and US Black mothers are more likely to die giving birth. Yes, we can have studies, and research and analytics on the why; and I am heartened by the Royal College of Obstetricians and Gynaecologists who launched a taskforce on 15 July 2020, to look at racism in maternity care, sexual and reproductive health registrar. That is fantastic.

But what we need to happen, is to be listened to, to be heard equally to our fellow white counterparts. This is turn will give us the confidence to be unequivocal when things are going wrong, to be confident to speak up firmly and loudly. We demand that respect and action.

Likewise, let us all publicly celebrate, thank, acknowledge, big up black women’s achievements, so that we are represented in the mainstream equally and as a normality. Where we do not have to work extra hard to get the recognition, the salaries we deserve and the positions/senior positions at work, whatever the industry.

And when things go wrong, for example, Megan thee Stallion being a domestic violence victim. Everyone needs to show up and use their voice to support black women. Let us break down the stereotypes and acknowledge that although we are constantly promoted as ‘strong black women’ we are humans, who have feelings and emotions and we can get hurt physically and emotionally. Sometimes we need others to show up and stand up on our behalf because we are not super-human.

It is still a work in progress and a long haul. Which is why we need affirmative action. Let us collectively, individually, and societally shift the dial in our attitudes towards black women, which hopefully will ensure modern, progressive, and fundamental change.